A wonderful bluff trail with wide-open views of the coast and several rocky coves.

The Jade Cove Trail is a simple flat path that loops out to the coast with a steep but short path down to the water where you can hunt for jade (please follow local regulations about collecting rocks). 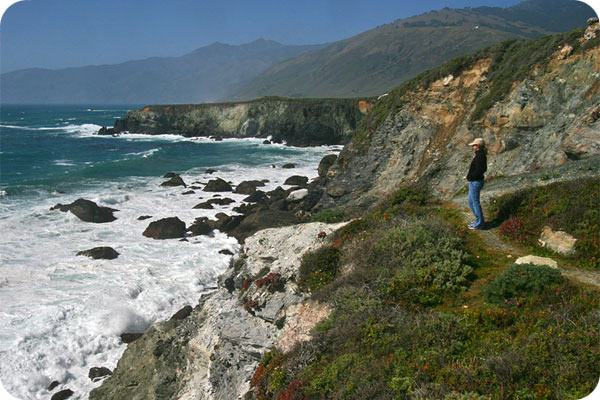 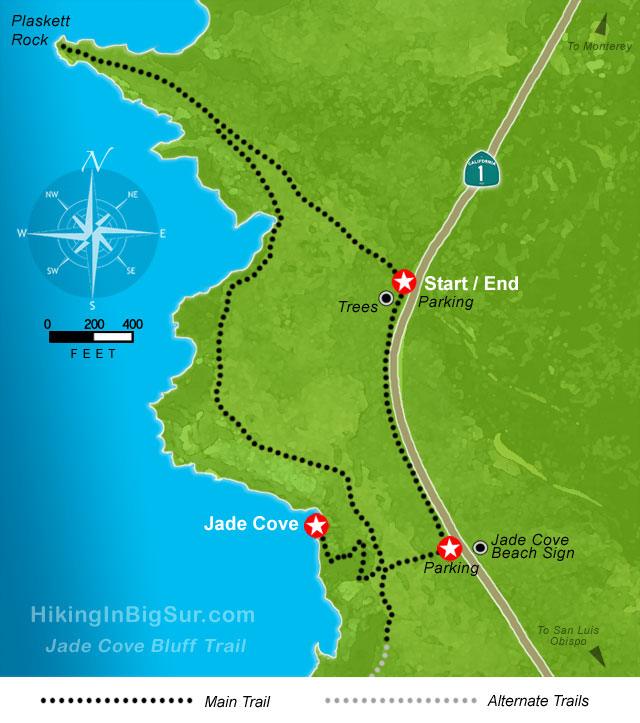 If you’ve parked at the southern pullout just opposite the Jade Cove sign, look for the path that heads directly west towards the cliff. This trail is short and takes you to the path down to the cove. 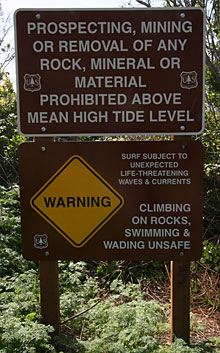 To explore the area a bit first before hitting the cove, park at the north spot and look for the trail that heads northwest out to Plaskett Rock point. This trail can be overgrown at times, so there’s a chance you won’t make it all the way out.

After turning back at the point, take the right fork south along the cliffs and wind your way towards the path that goes down to the cove. There are several spots along here that look like they might go down to the shore, but you’ll want to take the main cove path.

The short path down to the cove is rather steep and a bit treacherous in places, so use caution.

After exploring the cove area, head back up and straight east towards the highway. At the highway, head north to the starting point. 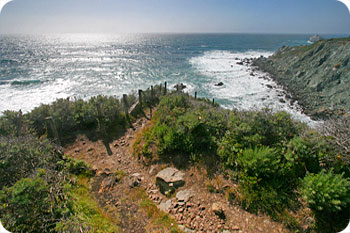 For some, the star attraction will be hunting for jade and other rocks. Guidelines have been created to limit the damage to the area from over zealous rock hounds and are worth reading if you intend to collect some stones. Remember you’ll have to carry what you find back up the hill!

Serpentine, which has the same color characteristics as jade, but has no commercial gem stone value, is also abundant in the cliffs and around the cove area. How to tell the difference? Jade is much harder and has a hardness rating of seven (7)—a knife or sharp metal instrument cannot scratch it. The best method for positively identifying jade is to scrape a metal object (like a can opener) across the rock in several places. Serpentine will scratch easily, but if small bits of metal are left on the rock, it is probably jade.

If you are only interested in going straight to the cove, you’ll want to use the southern pullout and proceed over the steps towards the ocean, across the bluff, and straight down to the rocky beach.

The bluff trail also continues south past Jade Cove, but will be spottier and peters out eventually.

Also while you are here, consider heading north a bit and pulling off at Sand Dollar Beach and/or the Pacific Valley Bluffs Trail, which combined with the Jade Cove Trail can make for a great day of bluff and beach.

The Jade Cove Trail loop starts from one of two pullouts along Highway 1, a mile or two south of the entrance to Sand Dollar beach. We prefer to park at the northern of the two pullouts and then wind our way back to the highway at the southern pullout which has more direct access to the cove. Either way is fine—check the map to see how this works.

You can park along the west side of Highway 1. For a landmark to find the pullouts, look for the sign marked “Jade Cove Beach Recreation Area” on the inland side of the highway as you head north (the sign is pictured at the right). The southern pullout is just across the highway from the sign, and the northern pullout is a little more than a tenth of a mile north of the sign.

Travelling south on Highway 1, the Jade Cove Beach sign is 9.7 miles south of Lucia or 33.8 miles south of the entrance to Pfeiffer Big Sur State Park.

This sign is across from the southern pullout area. We suggest you proceed a few hundred feet to the northern pullout where you’ll see a small bunch of trees on the west side of the highway. Park in the pullout near the trees.